By WebMasterSeptember 23, 2014Articles
No Comments 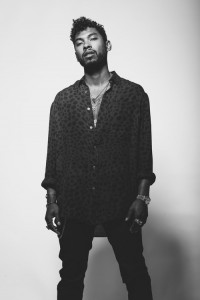 You may know him as the soulful singer on Mariah Carey’s “Beautiful” which he co-wrote and from his 2013 Grammy performance that commanded the audiences attention. With his unique and ardent voice, Miguel, who is of Mexican descent, is one of the most fervent R & B singers today. Miguel received multiple Grammy nominations with his sophomore album “Kaleidoscope Dream” the lead single “Adorn,” catapulted to the top of the charts, earning Miguel his third #1 hit single and a 2013 Grammy Win for “Best R & B Song”.

In addition to the success of his songs “Sure Thing,” and “Adorn,” all having topped the Billboard charts and his Grammy win; Miguel has toured with Alicia Keys during the Set the World on Fire tour, and co-written songs with Usher, Beyoncé and most recently Jessie Ware among others. His powerful performances and songwriting talents will continue to surprise his fans.

in popular music and we are so proud that he is Latino. Our distinguished LSHOF Board of Directors chose Miguel for the ‘Premio Triunfador’ to salute him for his amazing accomplishments and future triumphs.”

The October gala will honor these musical legends and their unforgettable songs written in Spanish and Portuguese as well as feature moving tributes and musical performances by some of the industry’s most important talents. Additional special honorees and presenters will be announced in the upcoming weeks.

LA MUSA AWARDS™ will be held on October 18 at The Ritz-Carlton South Beach in the city of Miami Beach. Tickets for the event are available via LSHOF’s webpage, https://www.latinsonghall.com/