Nominees Announced for the 2014 Latin Songwriters Hall of Fame

By WebMasterFebruary 7, 2014Articles
No Comments 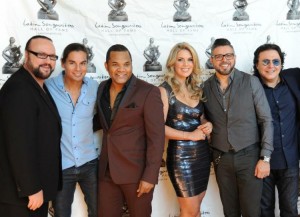 The public will be able to vote for their favorite composers by becoming a member, free of charge, of the Latin Songwriters Hall of Fame.

At a press conference held in Miami on Tuesday, January 28th, the songwriters and composers nominated for the second induction to the Latin Songwriters Hall of Fame (LSHOF ) were announced. La Musa is the coveted statuesque award.

Cuban/American actor Rene Lavan was the master of ceremonies at an event that portends another great ceremony for the Latin Songwriters Hall of Fame. . LSHOF was the dream of music producers Desmond Child and Rudy Pérez, which after more than a decade of their efforts, became a reality. Last year the first gala was held in Miami Beach. This year’s event will take place in the fall with the date soon to be announced. The public can vote for their favorite composers by becoming members of the Latin Songwriters Hall of Fame, free of charge. To do this, they must enter the website and register https://latinsonghall.com.

The voting period started on Tuesday 28 , and will end at midnight on April 27. The Hall of Fame inductees selected will be announced at a press conference on April 28. Then, there will be a master class called Master Class In The Round, involving great figures of the music industry as Claudia Brant, Omar Alfanno,and Fernando Osorio. Desmond Child and Rudy Perez will host the event.

Mission statement: The Latin Songwriters Hall Of Fame, is a non-profit organization founded in 2012 by legendary hit-makers, Desmond Child & Rudy Pérez, dedicated to recognizing and celebrating the legacy of the world’s greatest Latin music creators in every genre while nurturing and inspiring future generations of songwriters through workshops, showcases, scholarships and digital initiatives.