By WebMasterApril 29, 2013Articles
No Comments 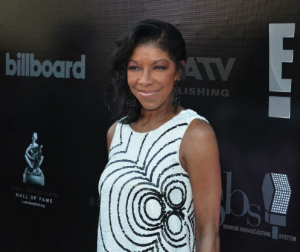 Natalie Cole looked and sang like a diva at the inaugural Latin Songwriters Hall of Fame gala at the New World Symphony on Tuesday night, delivering a lovely rendition of Acercate Mas (Get Closer) in a “Unforgettable” style duet with video of her father Nat King Cole. “It’s not easy being first, and Dad was a first in so many ways,” Cole told the audience at the New World Center on Miami Beach, as she accepted the Premio Pionero Desi Arnaz on behalf of her father, who was friends with the famous Cuban actor and singer. Nat King Cole was revered in Cuba for recording three albums of Latin American songs. “I can only imagine Desi and my Dad are looking down on us.”

But backstage in her dressing room the pop idol’s daughter, still wearing an elaborate ruffled pink gown, was sniffling with a nasty cold. “You know, the show must go on,” Cole said. She not only overcame blocked sinuses, but worries about singing in Spanish for the first time – in front of a mostly Latino audience. “They’re kinda looking at me like ‘oh really’,” she said. But she took heart from the song. “There’s something about the music that’s so moving,” said Cole, who will release an album of her father’s Spanish repertory this summer. “The melodies and the meaning are so beautiful. I’m having so much fun.”