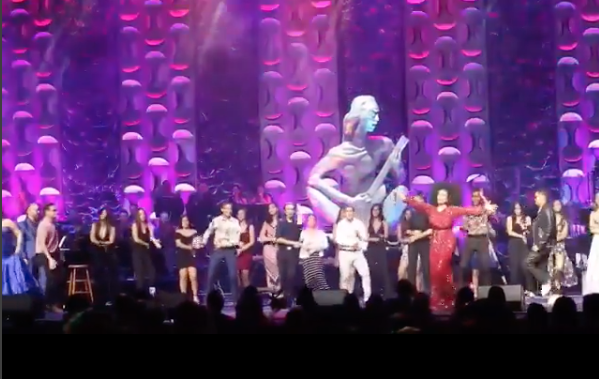 “The 2018 LA MUSA AWARDS ceremony was one for the books, honoring, as tradition holds, the world’s greatest Latin music creators and their memorable songs.” Billboard

Eydie Gormé, was honored with the Desi Arnaz Pioneer Award for her groundbreaking Spanish language albums with Los Panchos. To posthumously accept on her behalf was her son, David Lawrence, who performed a moving tribute medley of “Sabor A Mi” & “La Ultima Noche” as his father Steve Lawrence proudly watched on from the audience.

One of the night’s most stunning surprises was when Emilio Estefan walked on to the stage to present the La Musa Icon Award to this year’s Honoree, Puerto Rican mega-star, Victor Manuelle. He performed his hits “Si Te Dijeron” & “Tengo Ganas.”

Another breathtaking moment was when Mexico’s Gloria Trevi, inducted by Desmond Child, tearfully thanked her fans for their love and support through her difficult times and triumphs, followed by a thrilling performance of some of her biggest hits “El Recuento De Los Daño,” “Con Los Ojos Cerrados,” “Todos Me Miran” & “El Favor De La Soledad.”